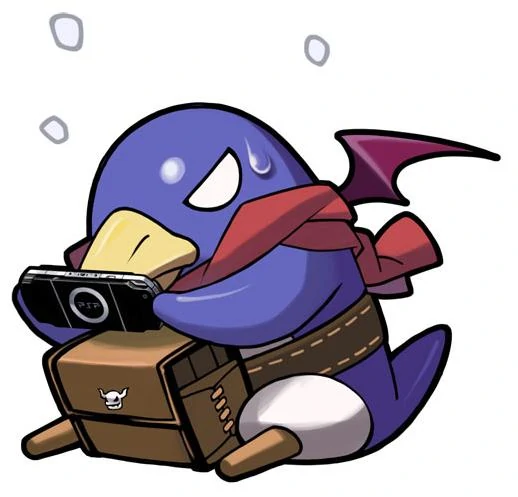 Bio: Formed in the 666th sector of Netherworld Aegis, Alph was immediately press-ganged into service for a successive series of unnamed masters, generally assigned menial and degrading tasks for minimal pay as was their station. One day, their current master, one that was particularly cruel and calculating, decided that they hadn't reached their torment quota for the current quarter, so they "reassigned" the prinny to fight for the amusement of others well above the lowly sinner's station. With no possible way to refuse the "offer" they were given, Alph tentatively agreed.
Top

Physically unintimidating, Lycitia stands about four-foot-nine, and probably outweighed by a wet dog. However, appearances aren't everything when concerning demons; her dimunitive frame hides a frightening amount of power. Other notable features are her dark-olive skin, human-like sharpened teeth, penatrating, slitted red eyes, and the alternating silver-black hair often cut in a short, punkish style. While in combat her Daedric armor (without the helmet, of course) cuts a terrifying figure, outside the arena she wears more comfortable clothes, usually anything loose and light.

During her entrances, though, she often uses illusions to change various aspects of her appearance, even going so far as to alter the look of her Regalia (though she has yet to figure out how to make them disappear altogether). Her tastes range from various forms of metal attire to punk to older pop styles, crossing a broad range depending on how she wishes to look on a particular day.

Lycitia has lived in her parent's shadows her entire life, seeking some way to prove her prowess in battle. Which is hard when no one has the gall to face her head-on. Several expeditions to other Netherworlds and numerous conquests later, her mother informed her of the "oppertunity" to compete against the strongest fighters around the multiverse, she snatched at it like a drowning man to a life ring. Conquest was becoming blasé anyhow; she needed something fresh to get the blood going again.
Top
Post Reply
2 posts • Page 1 of 1